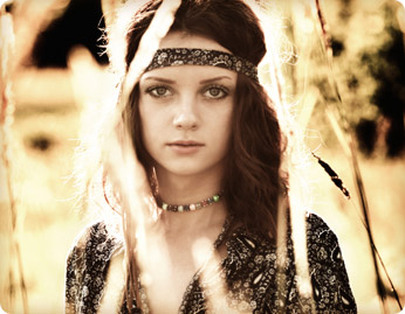 Through the duration of 1965-1975 an abundance of fashion trends were introduced and would later lead to the influence in styles we wear today.  This social and political turmoil instigated radical changes in the outlooks of fashion in many ways.  Women steered away from the traditional lady-like form fitting clothing during the late 1960s signified by the loose fitting styles of dress with no waist definition along with the initiation of trousers into women’s wear.

In 1966 when the Hippy Movement was introduced, fashion became highly influenced by their way of life and style.  The "hippy" style hit mainstream on television in the 1960s on news channels showing pictures of hippies, anti-war protesters, and their unique clothing combinations.  The 1969 Woodstock show served as a milestone capturing the hippy movement at its strongest time.

*All garments in photographs are original vintage pieces and were worn during this decade.